A Trike for Gracie…

When the Great Strides therapist team, working with then eight-year-old Gracie Young, asked her mom, Kelly, what were some special skills she’d like for them to work on with Gracie, that’s all it took.  Making this dream come true would take a lot more than a magic wand.  Instead, it would involve a year-long, specifically-geared learning process from initial desire to successful completion by the therapist team, along with a fund-raiser, generous donors, Santas Dan and Danny, and lots of love and patience thrown into the mix.

But that’s what makes the people at Great Strides exceptional in their dedication to doing whatever it takes to help children with special needs and their families participate in everyday activities together that typical families just do automatically.  And that’s what they were determined to do for the Young family.

Mom – Kelly’s dream was for Gracie to be able to ride a tricycle as a family activity with her mom and dad, who enjoyed riding bikes together.  It was important to Kelly, not just the activity of riding itself, but of having Gracie outdoors in nature and getting some exercise.  This would be no small feat for a child diagnosed with Hypotonic Cerebral Palsy, characterized by poor muscle tone and difficulty with balance and coordination of movements.

“Trying to find things that motivate Gracie to move has always been a challenge,” said Young.  “When we thought about bike riding, they jumped on the idea and everything started coming together.” Yes, Gracie’s “bike therapy team” of Kelly Wassmer, lead behavioral therapist, Sarah Szymanski Horn MOT, OTR/L, occupational therapist, and John Kirkland, physical therapist were happy to teach the skills needed to get Gracie to accept and enjoy riding a trike. (Others also supporting Gracie include Sarah Feigenbaum, speech therapist, Skyler Williams, teacher, and Emma Reinheimer, staff behavioral therapist.)

When Gracie was six years old she was also diagnosed with autism and that’s when she began receiving therapies with Great Strides, specifically behavioral (ABA) therapy for the first time.

“When Gracie first came to us, she had a hard time walking, poor endurance and wanted to be carried everywhere,” said Horn.  “Working on her mobility and endurance abilities, we eventually got her walking inside the classroom and outside on the playground.  The next step was to find a fun activity that would keep her moving—this was the dream of being able to bike ride with the family.

Team Gracie had already come a long way in giving her a more independent life, having worked on toilet training, being able to participate in a group academic environment by sitting still and listening to the teacher, and other self-care skills. 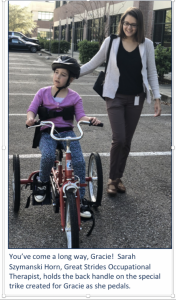 “An effort made for the happiness of others lifts us above ourselves.”
– Lydia M. Child

Now preparing her to ride a specialty bike that would be built to her needs and body specifications, would require getting Gracie used to many sensations that could be “scary” and resisted by her. With balance and muscle weakness important factors, just getting her to accept sitting on a trike and wearing straps to support her torso took a lot of time and patience.    Horn and Kirkland worked with Gracie on the action of pedaling with a special machine and put her on a regular tricycle and pushed her around to learn balance on a bike.  Horn and Wassmer worked with getting Gracie to tolerate wearing a helmet, and straps that support her torso and feet to stay on the pedals that the bike would have.  She was very afraid of being encumbered by all of this which took many steps and trials to accept. Finally, she “graduated” to actually practicing on the bike itself, but we’re getting ahead of all the parts of this special story.

Mom had found a specialty bike that could convert from a tricycle to a bike trailer by hooking onto one of their bikes for longer rides, but the cost was beyond what the Young’s could afford.  That’s when Horn got the idea of having a fund-raiser to help the Young’s get Gracie’s special bike.

With Sarah’s husband and his brother owning “Hornski’s Vinyl Lounge” in St. Augustine, Sarah set about the many months of tasks getting donors, a band, and silent auction gifts to create the “Battle of the Beers” event to raise funds.  Three St. Augustine breweries (Ancient City Brewing, Old Coast Ales, and Bog Brewing Company) donated a keg, five volunteered to work the event, the folk band Lonesome Burt and the Skinny Lizard provided the music, the Horn’s donated hotdogs, hamburgers, sodas and more beer, while sister-in-law Monica Zonni coordinated the silent auction.

The fund raiser was conducted through a 501C3 charity called Santa’s Special Kids. About 200 people participated in the event which raised more than $4,000, enough to buy the bike and have a lot left over.  These funds are currently housed by the charity and are waiting to be put to good use. The plan is to be able to help those parents who children need ABA therapy but have difficulty paying for it because their insurance does not cover it. Sarah is in the process of setting up the parameters of this fund working with Candy Hurst, BCBA, Director of Applied Behavior Analysis.

Making the whole process even more meaningful, Santa delivered the special bike to Gracie on Christmas morning!  Actually, it was Santa Dan and Santa Danny from Santa’s Special Kids who rapped on the Young’s door to a surprised Gracie and grateful parents.  Both Horn and Wassmur had therapy visits working with Gracie on her bike and then took the bike back to Great Strides to continue working with Gracie there.

Now, after an entire year that started in March 2017, Gracie is ready to take her trike home and enjoy riding it with her parents.  “It has been such a wonderful ‘ride’ seeing Gracie progressing and now being able to do something fun and outdoors with her family,” said Horn.  Great Strides’ specialists determination to find creative ways to help parents with their special needs kids has been a blessing,” said Young.  “They really did make this dream come true.”

“The therapists love for our kids is shown through all the creative ways they
help them grow and learn.”  –Kelly Young, Gracie’s mom

Other Recent Developments that are Making a Difference for Gracie

With communication at the heart of everything we do, team Gracie has been working with her toward transitioning the type of augmentative and alternative communication (AAC) method Gracie uses, led by her speech language pathologist, Sarah Feigenbaum MA, CCC-SLP.

When Feigenbaum began working with Gracie last summer, she was using a picture exchange communication system (PECS) that involved giving a picture (or pictures) to a communication partner. To help her advance, Sarah introduced her to the skills needed using the Proloquo2Go  system on an iPad with Gracie getting her own set-up this January. Her occupational therapist determined the best button size and spacing of her iPad that Gracie would be most successful with based on her fine motor skills. Now, she is able to select what she wants to say on the device as it speaks for her, acting as her voice. Gracie has a number of understandable verbal approximations and can use her device to augment her message.

At this point in Gracie’s AAC journey, she is able to request items and actions such as videos or to go to the restroom, as well as label items we show her using her device. When learning the meaning of new words as well as where to find them in her device, Sarah is working on getting her to choose more than one word. 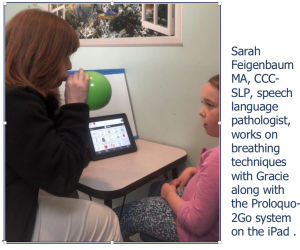 “We are beginning to work on verbs in combination with objects in order to help Gracie combine them to create novel messages,” said Feigenbaum. “Her lead ABA therapist reported that she recently put together the phrase, “I want go Kelly” (her mother), indicating she wanted to go home.”

In order to help Gracie learn new words, her parents are also involved, coming into sessions to learn methods to teach her to quickly navigate to new words. ABA ensures she is able to use them to communicate consistently in the classroom and other environments and also teaches her new words.  Communication occurs all across all environments and it takes a multidisciplinary team in order to support and set up a child to be successful.

Another new development in Gracie’s advancement that’s warm, furry and full of self-esteem boosting love is the recent adoption of Yahtzee — a canine companion for independence dog.  With the application process typically taking two years, Great Strides Executive Director Jon Edenfield, helped the Young’s with the process having written his doctoral studies on the benefits of canine companions helping advance children with disabilities, especially autism, and having adopted the center’s hardest working therapist, Nantucket.  One of Yahtzee’s missions is to get Gracie walking more.  Their adventure together is just starting and this newsletter plans a future article on the benefits of skilled companion dogs in a future issue.

“Great Strides has held our hand from the beginning, starting with Gracie’s transition from her old school, and incorporating behavioral therapy with all her other therapies have helped her tremendously.  “Gracie’s team gives us exceptional support.  They work with the kids and parents on life skills even at our homes, teaching them what they need to function in society.  The therapists love for our kids is shown through all the creative ways they help them grow and learn.”